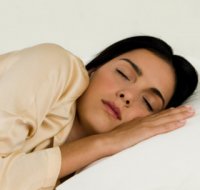 The study article starts off by noting that the average 9 month old should sleep approximately 14 hours per day. In this case study a nine month old infant girl was presented for chiropractic care with a history of severely disrupted sleep and fussiness. Additionally, the infant was refusing to breastfeed on one side and exhibited, what was called a generally unsettled behavior. It was also noted that the child would not turn her head to the left. These problems had been occurring since birth.

The examination confirmed a reduced range of neck motion to the left and significant muscle tension in the left and upper neck. Upon touching the neck the child exhibited signs of being in pain by crying and moving away. It was determined that subluxations were present, and an appropriate course of adjustments was initiated.

The results in this case were very impressive. The study noted that on the afternoon after the infants first adjustment the baby girl fell asleep for 5 hours. This was followed by nighttime sleep of 2 periods of 6 hours each. Over the next three weeks of care the daytime sleep got shorter, but the nighttime sleep remained between 6 and 8 hours.

In addition to the dramatic sleep improvement, the child also improved her range of neck motion and was able to turn her head to the left in response to sound on the left side. Additionally the infant began to feed freely and comfortably.

In their conclusion, the authors of the case study noted that the dramatic improvements after just one adjustment indicated that the vertebral subluxation found in this case was at least in part responsible for the disrupted sleep pattern.

Several different stories, from two separate countries, highlight chiropractors helping winter Olympians at the 2006 winter games.  One story, from the January 31, 2006, PRNewswire reported that two US chiropractors, Drs. Shapiro and Solomon, have been selected as the team chiropractors for the U.S. Olympic Team during the 2006 Winter Olympic Games in Torino, Italy.

The PRNewswire story notes that the athletes seek chiropractic care to maintain their health and improve their competitiveness.  The article also notes that with the increased scrutiny surrounding the use of performance-enhancing drugs, "athletes are turning to safe, drug-free health care whenever possible."

The second story from the February 9, 2006 Calgary Sun Canoe News reports on how Canadian athletes will also be receiving chiropractic care to help them in their pursuit of gold. In this story, Dr. Uchacz, of Calgary is there to help the Canadian athletes competing in bobsleigh and skeleton, with secondary support to the athletes in other disciplines. The story noted that Uchacz is thrilled to be instrumental in helping athletes optimize their performance.  He stated, "The bob and skeleton athletes have a real chance at several medals this time and that makes it quite exciting to be a part of.  This is the culmination of four years of development."

Another story in the February 10, 2006 St. Petersburg Times also reports on a local chiropractor, Dr. Sage Campione, who has been chosen to be one of 15 American chiropractors representing the chiropractic profession at the winter games.

The PRNewswire article concludes by pointing out just some of the athletes that have relied on chiropractic.  They noted, "The roster of Olympic athletes who have benefited from chiropractic care is truly impressive. Star performers such as Derek Parra, Carl Lewis, Greg Louganis, Willi Banks, Edwin Moses, and countless other greats from previous Olympics have taken advantage of chiropractic in order to get a leg up on their competition."

Thomas Bjorn is a professional golfer from Denmark who made a bit of sports history at the 87th PGA Championship when he shot a round of 63 and tied the record for the lowest score in a major PGA tournament. However, this accomplishment of sports history and Bjorn's second place finish in the 2005 PGA Tournament might not have been possible without the chiropractic care Bjorn received during the practice rounds prior to the start of the tournament.

The August 15, 2005 Daily Record of New Jersey tells the story of how a local Morris County chiropractor can take at least partial credit for Thomas Bjorn's record-setting round Saturday at the PGA Championship.  Dr. Patrick Ryan was seeing patients when he received a call from a colleague in London who was the chiropractor for Bjorn. 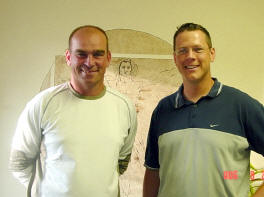 Shortly after this Bjorn, drove straight to Ryan's practice in Randolph NJ, complaining of a restriction in his neck that kept him from turning his head properly in his swing.  According to the Daily Record,  Bjorn had been forced to stop practicing after six holes prior to the tournament because of pain in his neck that affected his swing.

Dr. Ryan performed scans on Bjorn and reviewed information from his London chiropractor and came to the conclusion that Bjorn was suffering from a subluxation of the first thoracic vertebra, the point where the head and shoulders meet. This created severe muscle spasm at the base of Bjorn's neck and prevented proper rotation.

Bjorn then received an adjustment, and asked to return the next day.  On the following visit a new scan showed Bjorn's imbalance had improved from severe to mild. Bjorn reported that he felt terrific.  On Saturday, Bjorn shot a 7-under-par 63. That score tied the record for the best round of golf ever in a major tournament.  In interviews after the tournament, the Danish pro credited a new pain-free swing.

A feature story appearing in the June 30, 2005 edition of the Catonsville Times in Maryland celebrated the 10 year anniversary that a chiropractor had been helping the Baltimore Ravens Professional Football team. Ten years ago the Ravens came to town.  At that time Dr. Doug Miller (right) started his relationship with the team that has lasted since then.

Dr. Miller became the team's chiropractor by contacting the Ravens shortly after their move from Cleveland and telling officials about the services he provided to other sports teams in the area.  He was on the playing field when the Baltimore Ravens won the 2000 Superbowl.  He can also be found in the locker room and on the field on most Sundays during football season.

Raven's trainer Bill Tessendorf, refers most of the players that Dr. Miller sees for chiropractic care. Tessendorf, who has 32 years of experience as an NFL trainer explained, "A player favoring a knee or an ankle can cause alignment problems elsewhere. A chiropractor can help with a lot of those issues."

Dr. Miller explained that chiropractic care still remains misunderstood.  Most of his services are not necessarily related to the treatment of injuries.  He explains, "It's not just about relieving pain from backaches and injuries," he said. "It's about achieving optimum health. We can do a lot to help with the conditioning of muscles and joints."

The article notes that presently almost every NFL team has a chiropractor on staff.

Evidence reports recently released by the Foundation for Chiropractic Education and Research (FCER) show the effectiveness of chiropractic care for sufferers of Tension Headaches.  The story released February of 2001, was the continuation of a release of a study done at Duke University several years earlier.  In the study many different types of physical and  behavioral treatments were used for patients with headaches.  Chiropractic care was specifically compared to amitriptyline, a common medication used for headaches.

In this study the staff at the Duke Center screened articles from the literature, created evidence tables, and analyzed the quality and magnitude of results from these studies. They then drafted an evidence report with peer review from a panel of 25 reviewers, including researchers and clinicians in chiropractic.

The results showed that chiropractic was highly effective for patients with tension headaches. When compared with the drug amitriptyline, chiropractic and the drug had similar short term effects during the episode.  However, the drug carried with it an adverse reaction rate in 82% of the patients.

The most profound effects were seen after the care was discontinued in the study.  In these instances the patients who were on drug therapy essentially returned to the same state as before.  However, the patients who were under chiropractic care continued to show sustained reduction in headache frequency and severity even after the chiropractic care was discontinued.  The implications are that chiropractic is not actually a therapy or treatment, but rather gets to the cause allowing the body to effect a correction that lasts beyond actual care.

Chiropractic Care Beneficial for Chronic Neck Pain According to Study

A new study published in the February 2006 issue of the scientific periodical the Journal of Manipulative and Physiological Therapeutics (JMPT), shows that patients with chronic neck pain benefit from chiropractic.  The authors start off by noting that neck pain is, "a very cost-demanding health problem."  The study was performed at the Scandinavian College of Chiropractic in Stockholm, Sweden.

In this study patients with complaints of continuous neck pain during the previous 3 months were considered chronic and accepted for participation in the study.  Of all those participating, the patients were divided into two groups.  One group was a control group with no chiropractic care while the other group received chiropractic.

The same outcome measurements were used on both groups to be able to compare the results. A follow up assessment was done on all patients at the time of the initial consultation and then a second time at the end of the 5-week study period which was 2-4 days after the conclusion of the treatments for the patients in the treatment group.

The results showed that for two of the areas tested, the group that received chiropractic care on average showed improvement.  With respect to pain, after the intervention, the chiropractic group showed a significantly lower degree of pain intensity. The results of the testing for head repositioning (HRA) were even more impressive, where significant improvements in all aspects of HRA were seen for the group that received chiropractic care. There was however, no perceivable difference in the groups relative to range of motion at the conclusion of the study.

The researchers noted, "The results of this study suggest that chiropractic care can be effective in influencing the complex process of proprioceptive sensibility and pain of cervical origin."  In other simpler words, chiropractic helped for people with long standing neck pain.

Find us on the map